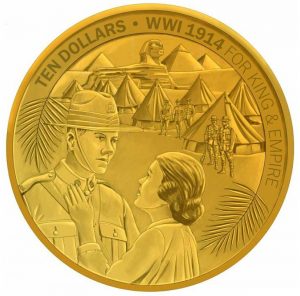 As the clouds of war gathered before the start of the Great War, the ‘War to End Wars’, WWI, the pundits were predicting that any major war could not last more than a few months; the treasuries of the combatants would rapidly run out of money…

This was an astute observation; war is by far the most expensive ‘activity’ that humankind can indulge in… Not only is the direct cost of supplying ‘guns’ enormous but also War entails capital destruction, population loss, trauma, desolation… truly Hell on Earth.

Nevertheless, instead of a ‘few months’ the carnage went on for years… millions killed and maimed, Europe razed… so how was this possible? After all, even though England called its loans, there was still far from enough money available in the treasury to support years of war instead of months.

Thus the paradox; how could the combatants pay for mayhem far beyond the money (Gold) holdings of their treasuries? To unravel this we need to examine the history of money, and the ‘classical’ Gold standard that the world lived under during the build up to WWI.

A true or ‘unadulterated’ Gold standard has three components or ‘legs’… Gold is first and most essential; Gold is money and only Gold is money… a la J. P. Morgan… with Silver and Copper as supplemental money to allow smaller transactions to take place. Gold coins are too valuable for day to day purchases.

The other two legs are debt (borrowing) and credit (not borrowing); today, debt and credit are lumped together… big mistake, they are two separate phenomena. Borrowing can be represented by the bond market, or by mortgages. Mortgages are simply collateral backed loans… while bonds are unsecured (based on ‘faith and credit’).

For example, the Treasury issues (sells) a bond; a promise to pay back the principle in a number of years, depending on maturity, and to pay interest during the life of the bond. The buyer ponies up cash to buy this paper, in order to collect interest… at least so it was. Today, holding bonds is a sucker’s game, most bonds are bought and sold in the anticipation of capital gains; a drop in interest rates will make the bond more valuable and vice versa.

Credit on the other hand involves no money changing hands; credit is given not borrowed. For example, a tank truck with 20,000 Liters of gasoline pulls up at the gas station, to refill the tanks. This delivery represents about $40,000, depending on the current price of fuel. No way the gas station attendant pays this sum; no COD. Rather an invoice or bill is signed with payment due in thirty, sixty, or up to ninety days.

In effect, the funds to pay this bill will come from ongoing sales of fuel. In the meantime, the signed bill has value as it will inevitably be paid, redeemed in cash; only a true calamity would prevent the ongoing sale of gasoline… or of beer, flour, cabbages… or any other consumer good in high demand.

In the days before WWI these bills were called Bills of Exchange, or as Adam Smith named them, Real Bills. These bills were in full circulation; in other words, were used as payment for most transactions… a vital monetary role. The Bill market represented the clearing system of the Gold Standard. Crucially, Bills could only be drawn against real goods delivered to retailers; unlike bonds, which could be printed and sold on a whim.

As more consumer based buying takes place, more goods are delivered and more bills come into existence; providing monetary flexibility, the very flexibility that ‘pure’ (Rothbardian) Gold money circulation does not have. Indeed, this lack of ‘flexibility’ is one of the excuses Gold haters use to knock Gold; while clearly the problem is not Gold per se, but the lack of a Bill market; the clearing mechanism of a proper Gold standard… a market that was destroyed with the onset of WWI… and was never restored.

Furthermore, Bills are not inflationary; All Bills expire (are paid) in not more than ninety days, Bills mature into Gold coin. Contrariwise, newly printed Fiat never disappears… but stays around to fuel inflation. This is not just monetary theory; world trade before WWI was cleared by Bills of Exchange in circulation; after the destruction of the Bill market, pre WWI levels of international trade were not regained until well into the nineteen seventies.

The Pre WWI British empire, the one on which ‘The Sun Never Sets’,  was run from London; and the British central bank had a miserly 250 Tons of Gold in its vaults; today the US Fed has supposedly 8,000 Tons; and various other countries each hoard several thousand tons as well. Of course, there is no Gold in circulation and no Bills of Exchange either.

Bonds are printed on a whim and bought with cash; most stay around for years, if not decades. Bills are drawn against real goods delivered, and mature in not more than ninety days; responding instantaneously to market changes. This fast feedback mechanism is vital to maintaining financial stability; prices and interest rates respond far too slowly to sudden changes in the markets. Wild and growing fluctuations in the economy are the result.

Unfortunately, we never had an unadulterated Gold standard; the ‘Classical’ Gold Standard as it existed had another ‘leg’ or component, usually called the ‘Fiduciary’ component… Fiduciary meaning promises rather than Real Bills or real money.

Historically Banks offered products that provide convenience. For example, letters of credit were issued by banks hundreds of years ago; a merchant planning a trip to make foreign purchases went to a bank, and gave the bank Gold in return for a letter of credit. This way he could avoid the risk of carrying rather large sums in Gold coin on his travels; he would present the letter to a bank at his destination, redeem his Gold, and conduct his business.

Furthermore, banks held not only Gold in their vaults, but also Bills in their portfolio… in fact, banks were often called discount houses. Bills are the form of paper closest to physical gold… and are also an earning asset. A bill with a due date ninety days in the future has less current value than the same bill on due day; this is the discount.

Like this; suppose the gas station has a spurt of sales, and sells the 20,000 Liters early; now has cash to pre-pay the invoice. Clearly the gasoline wholesaler and the retailer can make an agreement; the retailer will pre-pay for a consideration (discount) and be ready to order a new gasoline delivery.

But there are a few inconveniences with Bills; in order to use a Bill to pay another party, the Bill has to be re-assigned… just like a letter of credit it’s not a bearer instrument, but is assigned to one payee. Furthermore, Bills come not in round denominations, but in all manner of amounts; a truck load of Gasoline is rarely $40,000 in round numbers, but more like $38,672.80… Not so convenient when making payments.

Finally, every exchange of Bills involves (re)calculating the discount; every day closer to maturity increases the market value of the Bill… and this fact needs to be taken into account.

In the interest of convenience, banks started to issue bank notes; large denomination notes, bearer instruments, with round number values… and to balance their accounts, they held Gold (and Silver) in their vaults, as well as Bills in their portfolio.

Crucially, the books of the bank must balance not only in amplitude (assets = liabilities) but also temporally. Notes are fully liquid, a cash equivalent; to balance notes issued, assets held must also be cash equivalent (fully liquid) else we run into problems. Of course, Gold and Silver in the vault are cash… but Bills of Exchange in the portfolio are (almost) as good.

In order to keep Bills in their portfolios, banks had to constantly buy new bills as the old ones matured into Gold coin. One hundred percent of Bills mature in not more than ninety days…so, in case of unusually large demand for Gold, the bank would simply cut down on Bill buying… and allow Gold to accumulate and meet the demand. Worst case, stop buying… or even go into the superbly liquid Bill market and sell (rediscount) some bills even before they mature. No runs on the bank!

If we only stick to the three legs, we have a stable, market driven financial system; the Classical Gold standard came close. My father used to refer to pre WWI days, with a fond faraway look in his eyes as ‘The Peaceable Days’. Under the Classical Gold Standard, the world enjoyed the most peaceful and prosperous era in Human history. Unfortunately, the camel had his Note… er nose… in the tent. Chicanery began on two fronts.

On the bank liability side, small denomination Notes were issued; these had only one real purpose, to start convincing people that paper Notes (at first redeemable in Gold) were actually as ‘Good as Gold’; a bare-faced lie. IOU’s are not real stuff; claims on Gold are not Gold.

On the bank asset side, more chicanery; in addition to cash equivalent assets like Gold and Bills, the banks started to use Bonds as assets. This is where the real trouble lies; bonds do not mature into Gold in ninety days or less, rather they mature (if they ever actually do mature) in years or decades. Thus, if there is a large demand for Gold (cash) Bonds must be sold.

Selling bonds causes bond values to drop; capital losses and illiquidity if not bankruptcy soon follow. Thus lethal runs on the bank become possible. To counter this, rather than forbid Banks from holding bonds in their portfolios, central banks ‘lenders of last resort’ were created… as if lending could resolve problems caused by too much lending!

The original law passed by Congress to create the Federal Reserve specified that the Fed’s assets be constrained to commercial paper only… holding Bonds (that is, monetizing Government debt) was specifically forbidden… Of course, the law against the Fed not being allowed to hold Bonds was broken almost immediately; the law was changed retroactively.

There we have it; the camel has now taken over the whole tent. Treasuries issued bonds and banks issued Notes ‘backed’ by the Treasuries. No limits in sight, no market reality. Thus was funded the mayhem of WWI; fake money printed with no firm limits. But it did not stop there; WWII was also funded by G’man bonds and bankster paper Notes; the US had the highest debt to GDP ratio in history towards the end of WWII… and the game goes on. Now we come to the crunch; today the US debt to GDP ratio is even higher than it was at end of WWII… and so is the debt to GDP of Western countries.

What cannot go on forever will not. All the Fiat currencies ever issued have failed; and the current crop of Fiat is no different. At the rate Fiat is being created today, the end or as Von Mises called it the ‘Crack Up Boom’ is now upon us. The only question is, will the world again accept some IOU to play the role of money… say SDR’s (special drawing rights issued by the IMF)?  If so, the tragedy will repeat down the road. Or, will Gold be recognized as Money… and will an honest society with honest economics be restored.

Hope for the best and prepare for the worst.