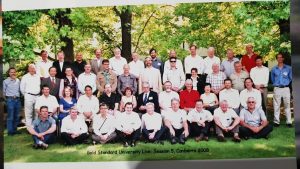 Professor Fekete is in the middle in the dark jacket. Rudy Fritsch is to his left and I am to the left of Rudy. This seminar was in 2008 in Canberra, Australia.

Professor Antal E. Fekete died on the 14th October 2020; he was buried in Hungary on the 4th December.  It is a sad time for those of us who embarked upon the study of economics via his unique monetary portal.  The Professor delighted in both his discoveries and his teaching.

Antal E. Fekete was born in Budapest, Hungary on December 8th 1932.  In 1955 he graduated in mathematics from the University of Budapest.  He spent his academic career at the University of Newfoundland in Canada, retiring in 1993 as Full Professor.  During this period he also had tours of duty as a visiting professor at many institutions, including Princeton University, New Jersey.

In 1985 Professor Fekete joined the staff of Congressman William E. Dannemeyer to work on fiscal and monetary reform.  He gave numerous lectures on Capital Hill and was the chairman of the group responsible for a presentation made to the White House on how to rein in the runaway US government deficit.

Over many decades he developed new theories of economics and explained much that had seemed inexplicable.

While the Prof lectured all over the world, a scholarly retreat in Szombathely, Hungary, was his favourite location.  Its drab classrooms were brought to life by the Prof’s sparkling wit and intelligence.  It had monastic sleeping quarters, blighted by cold, hard steel beds and sandpaper bed-sheets.  It was not a venue for the faint-hearted, but we delighted in being there.

Professor Fekete was a giant of his times.  Needless to say, the dogmatists who clung to the status quo did not appreciate him.  They saw themselves (correctly) as threatened by his logic.  As a man wholly consumed by a search for monetary and economic truth, this puzzled him; it should be acknowledged that it also vaguely amused him.

Professor Fekete’s influence waned over the last few years.  His wife Judith died and his own health deteriorated.  He also became unkind to himself by creating enemies out of friends.  While his judgement in economics and money was superior, his judgement elsewhere was sometimes painful to behold.

As Professor Fekete drew on the work of Carl Menger to present his own theories; so a few others have drawn upon Fekete’s work to continue the advance.  The field of the monetary science, so long dormant, is finally on the move again.

The events that Fekete long foretold did not come to pass in his lifetime.  I know from dinner conversations that this did not disappoint him.  Having fled Hungary after the failed anti-communist uprising in 1956, he had no desire to again experience the inevitable and terrible toll brought about by monetary debasement.

Professor Antal E. Fekete had a long, distinguished and independent life.  He significantly contributed to the advancement of knowledge.

Vale Antal E. Fekete.  Your students will fondly remember you.  History will know you.